In the work ‘Tadaatmaanam Srujaamyaham’, we get to read how the Almighty manifests Himself inthe life of a bhaktawho beingin the state of ‘Avahanam Na Janami’,  lovingly calls out to the Him, communicates with Him with love and stays grateful. This avatar that the Almighty takes in the life of a bhakta is to ensure the progress of his life in entirety, to destroy his hard or grim fate and to take him under His wing of grace. 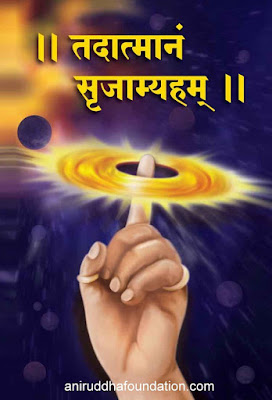 The book ‘Tadaatmaanam Srujaamyaham’ explains to us that the Swayambhagwan, the Lord of Infinite Cosmoses though all-pervading, abodes in the heart of a bhakta and stays very close to him. And this is exactly when a feelingto call Him out thickens in the mind of a bhaktaand brings out the voice– ‘Avahanam Na Janami’.

At the start of the ‘Tadaatmaanam Srujaamyaham’, Sadguru Shree Aniruddha writes – “I am no different from the insect, the ant or any animal for that matter. I am an ordinary being that is a part of the original sentient and vitallife force (Chaitanya). I heard a sound at an extremely serene and auspicious moment. The sound flowed and then became a kind of message. It flowed through the pen in a very easy, natural and spontaneous manner. The manifestation of it all is the writing that follows. The ‘I’ and all that belongs to it, ‘my’, ‘mine’, were never in the picture at all, are not and will never be. So, I pray at the feet of my Sadguru.”